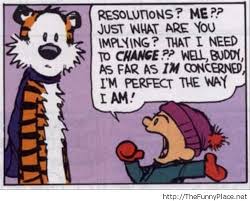 That time is here, another year has passed and we face those who are proclaiming in this new year it will “be my year”.  This is the year someone decides to make a substantial personal change. Great- and we get to hear all about it… for a while.

Now don’t get me wrong, I’ve had a “new year, new me” moment, one was in August 2011 the other March of 2013, I say that just to prove it doesn’t have to be January 1st to make a change. Everyday you wake up, its a new day, new chance, every hour is not the last, hell any moment can be striking enough for you to put your foot down and make a change.

But we all know we’ve been seeing them so lets break down a few & create the ones people can actually handle:

I will not tell the same story at every get together

Wash your hands after every time you use the bathroom

I will think of some new excuses to tell my boss for leaving work, he already knows the usual

Finish your orange juice before you brush your teeth

Spell-check all tattoos before inking process

Realize your past mistakes are gone, move on there are new ones to be made

Stop setting three alarms on my phone, just so we can turn the volume off after the first one

Learn what the hell “resolution” means

The best resolution of all, as quickly as possibly learn to write 2014 instead of 2013!

Get in on the conversation Cancel reply