Whats up with these guys who wear wigs/ dress like women for entertainment purposes?

First off, this is NOT new. Maybe today’s generation thinks Tyler Perry sparked it, and played the part a little too well eluding to the notion he was possibly gay. However, just for facts, if you go back up until the 1600’s ago it was not allowed for women to play these roles. So beginning with Shakespeare all roles in the act were played by MEN.

Now back to 2014, there is no cap or limit on how one expresses themselves or feelings.

I think homophobic actions is something that has been taught to be hated or make people feel some type away, not because its their own thoughts, but because they learned to be that way. my question is, when its entertainment reasons, why does a COSTUME / CHARACTER  upset you?

Personally, I don’t care, doesn’t bother me, but neither does actual transgender people.  So who is the issue here, the person carefree enough to wear a wig? The person comfortable enough to be whatever sexual orientation THEY feel, even if its different from yours? Or the person who has a problem with something different?

Thing is, if seeing a man in a wig bothers you- don’t look. 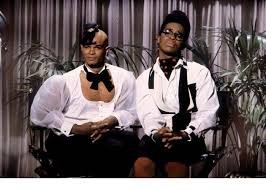 Get in on the conversation Cancel reply